She’s a prodigious talent with a legion of fans around the globe, but Auckland’s Astar tells Alliott NZ that, despite her success, she is still a mere dot in the grand scheme of things. 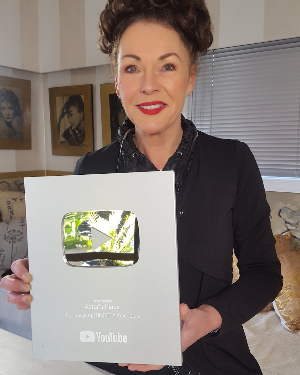 You’ve got to keep things simple and enjoy what you’re doing. It’s sage advice coming from the woman who is the face of one of New Zealand’s most successful exports, YouTube channel Astar’s Place.

Having added flourish to everything she has done in her career – first as a deer farmer’s wife, then as a floral artist and even as a finishing artist for the Sultan of Brunei before making her way onto NZ’s morning television screens – Astar never has her nanny far from her thoughts.

“Growing up in Invercargill, I had a wonderful nanny who started me off,” says Astar. “Nanny loved gardening so she showed me a sweet pea seed, planted it and let it grow and climb all over her windowsill so I could learn where the perfume came from.”

“To this day if I smell a sweet pea it takes me right back to nanny.”

Thus germinated the idea for YouTube and converting her downstairs flat into the Astar’s Place studio.

“After reaching an audience of 3 million TV viewers, my son Slade suggested that we take my segment to YouTube. At that time I didn’t even know what YouTube was!”

Astar and her international production team haven’t looked back. This year they celebrated 100,000 subscribers to Astar’s Place – so esteemed by YouTube themselves that her channel now has copyright and music clearance rights afforded to it.

“I think I resonate across the generations starting right back with nanny’s generation washing clothes in the copper, to the party line phone (our number was long-long-short) and now being up to date and having the skills to communicate on YouTube and social media.”

Astar keeps production small and steady so she can grow slowly. It means she can fix any pitfalls and keep the quality in check.

“I’m all about living on the smell of an oily rag and still being fabulous. I like beautiful things and want to surround myself with them. I love that I can turn my hand to recreating whatever I desire.”

“Astar’s Place works around my life; what you see is what you get. I hope I can solve viewer’s wants and desires with my quick and easy approach to achieving all that is possible with a little nanny know-how.”

“As life has become faster and more throwaway, fewer people mend and make-do,” Astar says. “But I seem to have attracted a group of 20 to 30 years olds who’ve not had the opportunity to sit by nanny’s knee and learn some of the older ways.”

“I think for my viewers at the other end of the age range, it’s very much about sharing similar experiences and reminiscing. And I love receiving emails from men asking me for potions and recipes for deodorant or sweeter smelling feet.”

Now showing 111,000 channel subscribers, what’s next on the cards for Astar’s Place?

“Next year my husband Steve retires after 47 years as a civil engineer and will join Astar’s Place with his superior attention to detail in logistics.”

“Then we plan to take Astar’s Place to the wider world over the next ten years with a grand tour through Eastern Europe to showcase and share how people live and do the things they do, starting in Georgia on the Eurasian continent and winding up in Georgia USA. I’m hoping to find some untouched hidden gems!”

“When I started out, I knew that the best way forward was to be in a bigger place, which was Auckland at the time. Once I left deer farming behind and started exploring new opportunities like running floral art classes, GST coincided so a student introduced me to Greg Millar.”

“Greg is interested in the numbers; the only thing I like about numbers is that zero and eight are symmetrical shapes so I leave all the other numbers to Greg. I have been with him for 25 years.”

Astar may think that she’s just a dot in Auckland ‘at the bottom of the world’, but there’s no denying that she’s one very bright dot. You can find out why and even join Astar in her world on YouTube, Facebook or Instagram.