Home > Blog > NZ ahead of the curve on payments

NZ ahead of the curve on payments

Kiwis began paying with Apple Pay last year, which shows how nowadays smartphones can be used for almost anything. 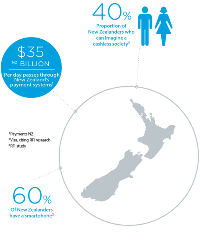 Because of its relatively small population and strong adoption of the latest technologies, New Zealand can be seen as a testbed for the latest payments innovations.

The payment stage of a daily habit – like grabbing a coffee or buying a newspaper – is becoming so easy people don’t even think about it.

This is just one step in the evolution of payments becoming faster, more transparent, and ultimately cheaper.

Behind the scenes, in the plumbing underpinning New Zealand’s payments system, other changes are underway to lay the basis for future innovation.

The ‘cleared funds initiative’ is now live, which means banks check money is in an account before sending an electronic payment.

This removes the scenario where a payment could be sent, received by the beneficiary, and then dishonoured by the sending bank because there is not enough money in the sender’s account.

Additionally, New Zealand’s banks have introduced changes which mean scheduled – or regular automatic payments – are sent earlier in the day, and settlement occurs at more regular intervals between the banks.

This brings New Zealand closer to real-time, or immediate, payments where the time lag between sending a payment and the receiver actually getting paid is getting shorter.

As many markets around the world move to real-time payments, New Zealand has less of a jump to make because it is already close to real-time.

We are seeing more businesses beginning to think about how they can reflect payments they receive into their own systems during the day.

In fact, the payments system in New Zealand has been built on efficient foundations and the payments market is a world leader in many respects.

Because of its efficient foundations, New Zealand is well placed to take advantage of the latest developments, whether it is real-time payments or trialling blockchain and distributed ledger technology.

This innovation will have consequences for consumers and businesses. How people are paying for goods and services is changing, and companies need to adapt to make the most of the opportunities this brings.

Faster payments mean people will receive their money quicker, which means people will have to adjust accordingly.

If payments are being settled throughout the day, a company’s systems will also need to keep pace. Accounting systems, for example, need to be able to show the money as it comes in.

There are positive reasons for adapting and staying ahead of the latest payments trends. Because of the nature of the payments infrastructure, New Zealand is well positioned to embrace this wave of innovation.