How the rising sun shines on the long white cloud

For at least the last five years, the discussion around foreign investment in New Zealand has focused on China. It’s not surprising given over that period Chinese (including Hong Kong SAR) direct investment into the country has increased fivefold, from a cumulative total of about $NZ1 billion in 2010 to well over $NZ5 billion in 2015.

That surge in investment has coincided with an upswing in focus by the NZ public on foreign investment in land, particularly agricultural land. China's interest was really in commodity offtake and agritech but that’s another story – New Zealanders focused on one, high-profile source of foreign capital.

But the focus on China has obscured the fact one of the largest cumulative investors in NZ over the last 30 years is another country still with a very active interest - and indeed is demonstrating a renewed appetite for investment in NZ. It is a source of capital which needs to be better understood and can be a valuable long-term partner to NZ's capital needs.

That country is Japan, with renewed interest born of a thirst for growth from corporate Japan which can no longer be satisfied in its domestic market. 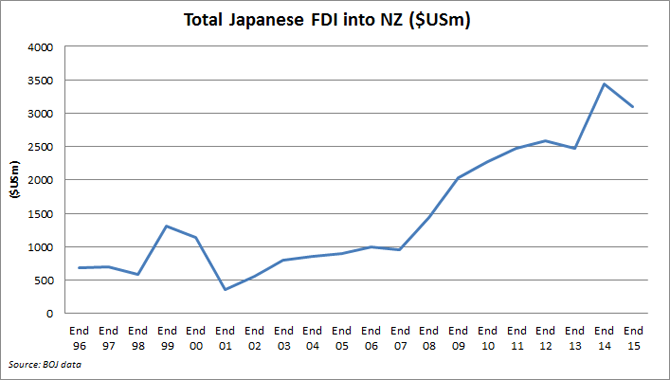 Japan first began more active investment in NZ in the late 1970s, a time when Japanese capital was making its presence felt all over the globe.

The initial investment targets were forestry, fisheries, automobiles and information technology. But Japanese investment per se dates back much further, with Kanematsu, a major trading house or sogo shosha, opening in NZ in 1937.

A number of other large concerns opened NZ operations in the late 1950s as Japan began its industrialisation phase.

Since those initial forays, Japanese companies have invested a cumulative total of over $NZ5 billion into NZ, making it the country's fifth-ranked foreign direct investor, though within touching distance of being the third.

It accounts for just less than 7 per cent of New Zealand’s foreign direct investment (FDI) stock. Japan is also a very significant portfolio (non-direct) investor in NZ, as a holder of substantial amounts of debt issued by both public and private sector entities.

Now Japan is coming back for more. For Japanese companies, the domestic market no longer represents a source of growth.

With a population declining since 2015 (the first major world economy to do so), and with a third already over 60 years of age, domestic demand for most goods and services is either flat or declining. There is no visible path to trajectory reversal given the deeply embedded opposition to immigration.

As a result, Japanese capital has been seeking sources of growth and yield offshore. This has already been evident in NZ over the last 2-3 years as a number of deals have been struck.

Notable in the more recent Japanese investments has been the diversity. As the Table below shows, over the last few years this has covered industries as varied as advertising, marine technology and beverages.

One thing earlier waves of investment demonstrate is corporate Japan is a long-term investor and one upholding high standards in areas such as labour relations and corporate social responsibility.

This simply reflects the way those same companies operate in Japan. The country is notable for the long-term focus of its companies - and indeed its relegation of the priority of the shareholder relative to employees and customers.

This has always stood in noble contrast to the West - though to be clear, it also creates its own issues - and has made the country a generally very welcome investor across most of the globe.

I have had direct experience of this in the Mekong region, where countries such as Cambodia and Myanmar have seen a significant increase in Japanese investment in the last three or so years.

What stood out with much of the investment was the strong focus on training and uplifting local workforces in countries where labour was unskilled. This has had the effect of lifting standards more broadly in those countries. As a result, the host governments have actively targeted further Japanese investment.

NZ is a market at a very different stage of development but what it does share with these emerging countries is a need for capital and new technology. The savings deficit of NZ is well documented and this, combined with a generally low appetite for equity investment by those who do have savings, has created a supply gap for capital.

By some estimates, NZ requires up to $NZ200 billion of additional capital investment to support the government’s target growth trajectory. When you consider net FDI has averaged around $NZ500 million per annum over the past 10 years, there is enormous ground to make up.

Some in NZ are recognising the renewed opportunities represented by Japanese capital and know-how.

The Minister for Economic Development, Steven Joyce was a recent visitor to Tokyo and has explored this first hand. Notably, a significant delegation of Maori business interests, led by Maori Development Minister Te Ururoa Flavell, was also recently in Japan to engage with local business and investors.

These are good signs the NZ government and corporate sectors are alive to the re-ignited potential of Japan. NZ has in recent years had an almost obsessive interest with China, for both inbound and outbound investment. There is no doubt about the importance of China as an investment and economic partner.

However good investment is always about diversification -  and this is true at both company and national level. As someone who has lived and worked in China, there is no doubt it is not always the best market for a NZ company to explore, just as it won't be the best provider of capital for every investment in NZ.

Japan as an investor warrants more attention and consideration of the role it can play in meeting and diversifying the capital needs of NZ.

It is important this doesn’t just remain an interesting dinner-table discussion. A more detailed understanding of the needs and opportunities in NZ should ideally be presented in an appropriate format to potential Japanese investors.

This requires some deep thought and planning at the NZ end, as well as engagement between government and private sector.

If this all sounds like hard work - it is. But for NZ to sustainably meet its capital requirements will require it to think like a business and prepare a long-term strategy to access capital.

Much like its tourists, Japan’s capital has many choices of destination. Now NZ needs to make sure its investment opportunities are as attractive and well-marketed as its scenery.