Home > Blog > What the Brexit fallout means for APAC

What the Brexit fallout means for APAC

Right now it is a wait-and-see game. 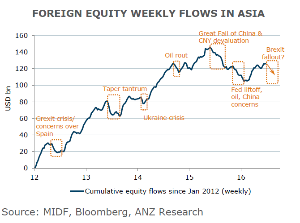 The longer-term playout is much harder to predict. If the initial tightening in global financial conditions proves lasting, recession risks could rise, encouraging increased policy easing over time from central banks.

What then for Asia? The options for European countries are well-documented with the Bank of England potentially forced to cut rates while the European Central Bank will likely continue with its super-easy policy.

There is definitely a risk of portfolio outflows emerging in Asia, particularly on the equity side. The question from here is whether the sell-off is temporary or proves to be longer lasting.

Beyond the financial market impact, one of the areas to watch is the potential trade implications. ANZ Research does not see a large direct impact via the trade channel as the UK’s share of Asian final demand is somewhere between 0.5 per cent and 1.5 per cent.

However, this is predicated on continued access between UK and Asia. Replacing the EU’s free trade deal with Asia will not be easy for the UK. Once the Kingdom is out of the EU it will not enjoy similar trading privileges with Asia. If no new FTAs with Asia are in place when the UK leaves the EU, they will be subject to prevailing WTO tariffs.

Still, it is still too early to accurately predict how Asian economies will respond immediately to the Brexit.

There will likely be some pressure for lower rates in Australia and New Zealand.  ANZ Research’s existing view on the RBA is of persistently low inflation narrowly favouring a rate cut in August. The Brexit could place additional pressure on the RBA to cut if continued volatility materially dents confidence.

In China, although the Brexit is unlikely to affect the immediate economic outlook, ANZ is still penciling in one more additional RRR cut for 2016. China will likely exercise both its conventional and unconventional monetary policy tools in response to the development.

Chinese Premier Li Keqiang visited the PBoC on 20 June and he stated China should maintain its current monetary policy stance. What he might have told the PBoC officials could be how to react to the Brexit.

For Singapore, the direct trade exposure to the Brexit is very small but the event risk surrounding the seismic shift was never going to be an economic one. Rather it is a political and markets risk, darkening an already uncertain global back drop.

For example, the EU accounts for less than 10 per cent of Singapore’s total trade but the UK accounts for 1.31 per cent of goods trade. Even with trade being 300 per cent of GDP, this is not a significant enough number by itself to sway Singaporean exports or GDP off its already weak profile.

It is important to remember Britain is not leaving the EU immediately.  This referendum has triggered a process that will play out over the next two to three years and economic agents and financial markets, in the long run, will have ample time to adjust to an EU no longer including Britain.

Of probably greater importance for the global economy is the sharp rise in uncertainty over the future of the EU and the drive towards deeper EU integration.

At this stage it is impossible to quantify the negative impact a rise in political uncertainty across the EU could have on growth. Whatever it is it will not be positive and could lead to greater caution from businesses and households.

That could arguably lead to delayed investment and hiring while encouraging households to raise their savings rates.