Home > Blog > The tills are humming in New Zealand

The tills are humming in New Zealand

Five years ago, annual spend on credit and charge cards issued in New Zealand was just a little over $NZ30 billion and this is now poised to exceed $NZ40 billion in the 12 months to May 2016.

Compare that with the island off New Zealand’s west coast. Growth in Australian card spend has slipped from 5.7 to 5.1 per cent over the last five years – and that’s before the added uncertainty stemming from the election – while in New Zealand it has risen from 2.8 per cent to 8.0 per cent.

There’s no doubt consumer confidence has some part to play in this (and again the Australian election is unlikely to improve the situation). The ANZ-Roy Morgan Consumer Confidence index in New Zealand has recently moved lower but has remained above the Westpac-Melbourne Institute Consumer Sentiment Index in Australia throughout the last five years.

In addition, the index in New Zealand has been well above the 100 mark at which optimism and pessimism are balanced.

The increasing use of payment cards in New Zealand is maintaining that market as a world leader in per capita use of cards.

Spend outside of New Zealand by New Zealand cardholders has been particularly buoyant having grown from $NZ3,450 million five years ago to $NZ5,090 million today.

This represents growth of 47.5 per cent in five years in comparison to what would be considered sound growth of 29.1 per cent in spend within the country over this same period.

Kiwi cardholders are currently spending a considerable 12.8 per cent of their credit and charge card dollars outside of the country compared with 11.3 per cent five years ago.

It is interesting to consider the principal drivers of this growth in card spend. Segmented card data is issued by both Statistics New Zealand and Marketview and standout growth is presently being seen in hospitality at 11.3 per cent, motor vehicles at 11.4 per cent and services at 9.2 per cent (Statistics New Zealand) with bars, cafes and restaurants at 12.5 per cent, furniture and flooring at 11.4 per cent, takeaway foods at 10.0 per cent and automotive at 10.0 per cent (Marketview).

The underlying trend in annual growth in card spend from both sources has been upwards over the last 12 consecutive twelve month periods.

Observers could be concerned with the recent strong metrics in card spend. The May 2016 monthly credit and charge card spend was the second highest on record and 12.3 per cent above the May 2015 figure.

At 8.0 per cent, spend is now increasing at its highest rate in almost eight years. However, the movement in growth of balances indicates an altering pattern of cardholder behaviour with a changing relationship between spend and balances.

In fact over the last two years the growth in spend and growth in balances have been markedly divergent. Cardholders have increasingly embraced credit and charge cards as a payment option whilst more aggressively managing the resultant card balances. 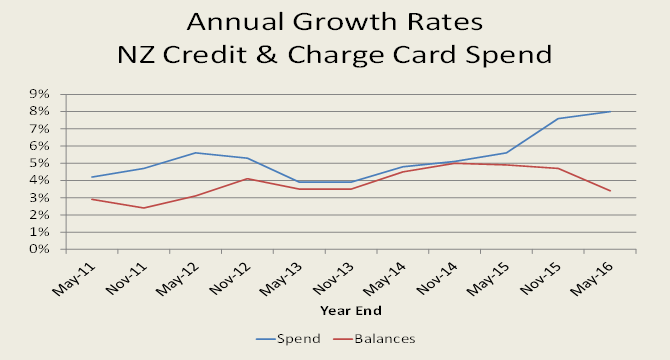 On the Australian side of the Tasman, consumer sentiment has continued to be soft. Whilst the index did move above the 100 mark in May and June, it has been below that crucial mark for most of the past 2 years.

In fact, the last time the annualised sentiment series in Australia exceeded 100 was in August 2014.The series has edged higher in recent months but the uncertainties associated with Brexit, the US electoral process and now our own Federal Government are unlikely to maintain this trend.

The prognosis is expected to be a continuation of the more buoyant mood and spending patterns at our near neighbour. 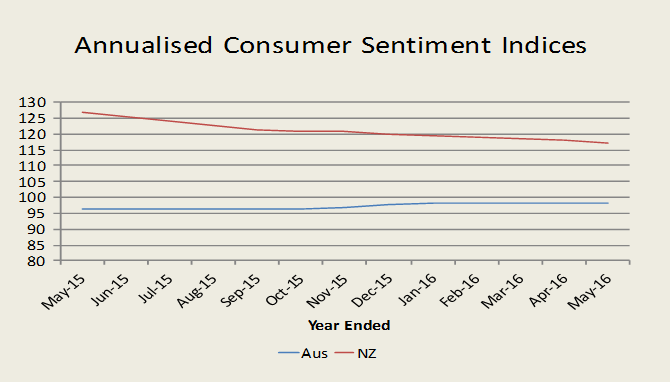 Mike Ebstein is founder and principal of MWE Consulting, a specialist payment card, loyalty and reward scheme consultancy. He has nearly three decades experience in the payments business and consults to major banks and retailers. ​