NZ productivity not too shabby, but improvement needed

Like recent Gross Domestic Product revisions, the data helps square the circle on a number of issues: strong corporate profit margins, modest inflation pressures and the relative strength in the $NZ. 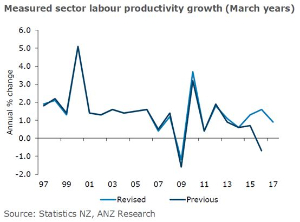 Still, it doesn’t alter our view that at a time of slowing population growth and a constrained labour market, onus will fall on productivity growth to sustain reasonable rates of GDP growth going forward.

A lift in productivity growth is possible and we are hopeful, but it is likely to require greater levels of capital investment than has been the case recently. Shifts in the relative price of labour and capital look set to help, but other tweaks (including to government policy) may assist as well.

In the year to March 2017 labour productivity growth in NZ’s measured sector (comprising about 80 per cent of the economy) rose 0.9 per cent. The lift was driven by a 1.0 per cent lift in multi-factor productivity, offset by a 0.1 per cent fall in the capital-to-labour ratio.

Courtesy of the recent significant revisions to GDP growth, labour productivity growth in the years to March 2015 and 2016 was revised up to 1.3 per cent and 1.6 per cent (from 0.7 per cent and -0.7 per cent respectively).

It means since 2008, average annual labour productivity growth is now reported to have been 1.1 per cent, compared to 0.8 per cent previously.

Average annual growth in multi-factor productivity (effectively a measure of the overall efficiency) is now reported to have averaged 1.0 per cent since 2013, compared with just 0.4 per cent previously reported.

The revisions help explain modest domestic inflation pressures, via its implications for the economy’s supply-side potential (which appears to be higher) and unit labour costs. It’s also more consistent with what has been a strong backdrop for corporate profitability and margins. Our estimate of corporate profit margins is well up from the average over 2011 and 2012.

The upward revisions don’t mean we can be complacent. Economy-wide productivity estimates falling out of more-recent quarterly GDP figures are not quite as upbeat.

We need to be a little careful with making direct comparisons as the official productivity figures are measured on a slightly different basis, but GDP per hour worked, GDP per hour paid and GDP per full-time equivalent employee are all providing the same signal: a moderation in productivity growth recently.

ANZ Research is still of the view labour productivity growth will have to perform (and in fact do even better) if recent rates of GDP growth are to be maintained.

Population growth is likely past its peak as net migrant inflows slow, and it is unlikely growth in rates of labour utilisation can be maintained when both the employment rate and the participation rate are already effectively at all-time highs. The onus will therefore fall on labour productivity growth to be more of a driver going forward. 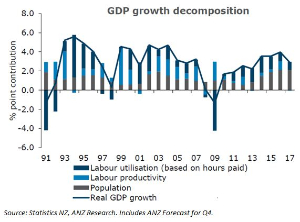 When it comes to the outlook for productivity growth we are hopeful, for a few reasons. The economy continues to make progress on moving up the value-add chain in terms of our commodity exports, and it is perhaps under-appreciated how this is now flowing through to our terms of trade and incomes.

The economy continues to rank strongly in measures of international competitiveness and ease of doing business. And the negative impact of natural disasters, which undoubtedly must have had an impact on the efficient allocation of capital, should also start to wane.

But greater investment in capital will likely be necessary to deliver a labour productivity dividend. New Zealand’s ratio of capital to labour has effectively been unchanged since 2010. In economist parlance, there has been no ‘capital deepening’ in contrast to the prior 10 years where the ratio grew at an average pace of 2.0 per cent a year.

It means the labour productivity growth which has been experienced over recent years has effectively been driven entirely by multi-factor productivity. That is impressive on its own way but unlikely to be sustainable without further capital investment.

Fortunately, the stars are now aligning for exactly that.

A tight labour market will force firms to look at alternatives. Firms continue to report it is extremely difficult to find skilled staff. While the unemployment rate could of course fall further, it is more about the skills labour possesses rather than the number of workers per se.

That is a harder problem to solve, and could see firms look at other ways to expand capacity, ie through capital investment and automation. We are certainly hearing anecdotes to that effect.

The relative price of labour and capital should start to shift. One clear reason why the ratio of capital to labour hasn’t risen is it has been relatively cheap to throw labour at the problem of increasing output rather than take the risk of capital investment.

With tentative signs wage growth is starting to rise (due to both policy changes and a tight labour market) the attractiveness of capital investment should increase. The elevated $NZ should help too, by making imported capital equipment cheaper.

Although surveyed business confidence took a hit after the election, we are picking up a vibe of ‘just getting on with it’. The risk profile around the near-term growth picture doesn’t appear as negatively skewed as it was.

The broader outlook for the economy, while not expected to hit the pace of growth experienced over 2015/16, should still be solid, providing firms with the confidence to continue to put cash to work.

Finally, while some of the changes the new government are considering should perhaps assist: redirectly investment from housing to more productive assets and re-introducing tax credits for research and development.

In one sense, revisions to historical productivity statistics don’t ‘matter’ in they don’t change a thing about how well off we are at this point in time. We can all feel a bit better about ourselves.

In a broader sense, productivity growth is everything in terms of economic growth which improves lives over the long run. It’s good to hear we have been working smarter as well as harder but with the economy and labour market starting to hit its physical limits, the ‘smarter’ bit needs to take a step up. That needs better tools.

The views and opinions expressed in this communication are those of the author and may not necessarily state or reflect those of ANZ.

Article by Inside ANZ Bluenotes. First published on 28 February 2018 - https://bluenotes.anz.com/posts/2018/02/NZ-productivity-not-too-shabby-but-improvement-needed#.WqsE-FJb4yA.email