TRADE ministers on either side of the Tasman are questioning the legality of the Palaszczuk government’s proposed “Buy Queensland” procurement policy. 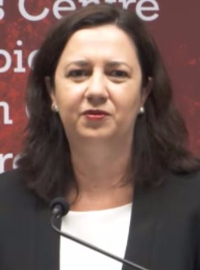 QLD Premier Annastacia Palaszczuk says she is unrepentant about her Buy Queensland procurement policy after it caused a stir across the Tasman in New Zealand.

A riled-up New Zealand Government extraordinarily slapped down the Premier, accusing her of “lacking an understanding of how trade works” and putting at risk Queensland jobs.

The Premier backed the policy, saying it was about putting Queensland first.

“Our procurement policy is about Queensland,” she said. “It is about putting Queensland jobs first and it is something I back in 100 per cent.”

Ms Palaszczuk said the Federal Trade Minister did not raise any issues with her about the policy when the pair met on Monday.

“While I’m putting Queensland jobs first I think our Federal colleagues are playing politics,” she said.

Ms Palaszczuk claimed the New Zealand Trade Minister had not read the State Government’s procurement policy before making the comments.

There are fears Ms Palaszczuk’s policy could now start a tit-for-tat trade war that could come at the expense of Queensland workers — at a time when federal Trade Minister Steve Ciobo is trying to convince other countries to invest in the state.

NZ has sent a diplomatic cable to the Commonwealth asking for explanation, forcing Mr Ciobo to seek advice on whether Australia was in breach of Government Procurement Agreements.

It is understood NZ has questioned whether the actions of the State Government was also at odds with the Federal Government’s plan to enter into a global procurement agreement (GPA).

Mr McClay today said he had not spoken to Ms Palaszczuk and was seeking advice from lawyers about the legality of the new policy, to be implemented on September 1.

“I haven’t seen all of the detail of what she’s proposing ... I don’t see how it can work and it’s going to cost a lot more money,” he told the ABC on Friday.

Australia is the only developed country not signed on to the World Trade Organisation’s GPA, which would give Australian businesses certainty and recourse when bidding for government procurement in 47 countries, valued at more than $2 trillion a year.

Mr McClay exclusively told The Courier-Mail: “I am disappointed to hear the Premier say this (Buy Queensland), as it seems shortsighted and lacks an understanding of how trade works.

“Queensland exports almost $5 billion of goods and services to New Zealand each year and many Queensland jobs depend upon access to the NZ market.

“Australia and New Zealand have the world’s longest trading ties. My advice to her is to get out a bit more, and I invite her to New Zealand. She might find more work for Queensland businesses while here.”

A number of Queensland companies have contracts with the NZ Government, including travel giant Flight Centre.

“What if NSW does that and Queensland businesses can’t get work in NSW?”

Under the Buy Queensland policy, the State Government from next month will make it easier for local suppliers to be awarded contracts.

It will define a local supplier as a business that maintains a workforce within a 125km radius of where the goods or workers are needed, and local suppliers will receive a local weighting of up to 30 per cent on any tender lodged for a significant procurement.

In a statement to The Courier-Mail last night, Ms Palaszczuk said: “The Australia-New Zealand government procurement agreement says, for example, that a company in Christchurch stands on an equal footing with a company in Cairns when it comes to doing work on a project in far North Queensland.