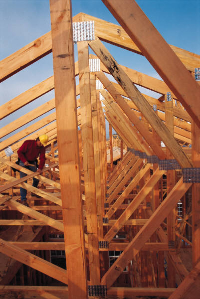 Statistics New Zealand reported more than $4 billion worth of activity was put in place in the three-month period - the most since records began.

It was up eight per cent on the same period last year and the volume of non-residential work was also at a record while residential volumes were still short of their peak in June 2004.

The value of all building work rose a seasonally adjusted 2.2 per cent in the June quarter, with a 5.9 per cent gain in non-residential work and a 0.1 per cent increase in residential activity.

Auckland’s residential work grew, while in Canterbury most growth was non-residential.

Building activity is forecast to remain robust over the next six years, with $209.4b of work projected over that period, peaking in 2016 at $36.5b of work. The bulk of that is associated with house building in Auckland, where builders are under pressure to meet unsatisfied demand.

Auckland residential work rose a seasonally adjusted 4.8 per cent in the three months through June, its eighth quarterly expansion, while house building shrank 4.3 per cent in Canterbury.

In non-residential work, Auckland activity shrank 3.3 per cent, its third quarterly contraction, while Canterbury work grew 18 per cent, the biggest expansion since September 2013.

Whilst it’s exciting times for construction and the trades servicing the sector, think about how future proof your business actually is by asking yourself:


Feeling left behind or out of control? Call Alliott NZ in Auckland today on 09 520 9200 to organise your trade business and take advantage of the market upswing.